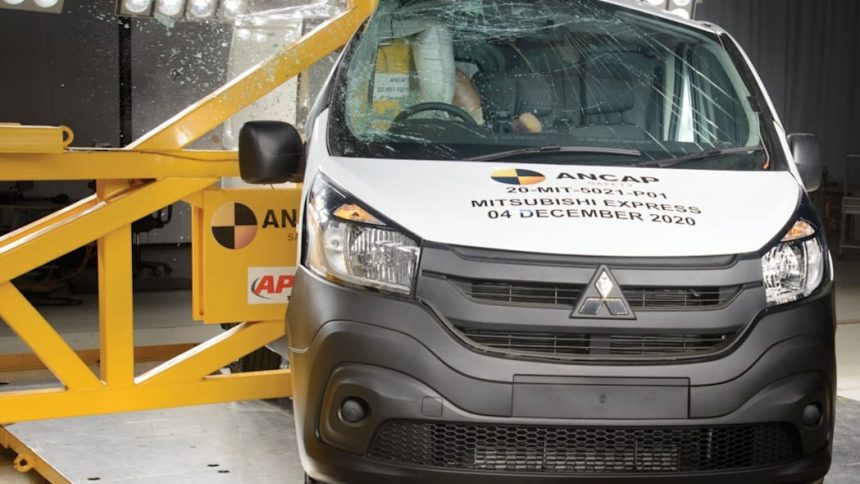 The ANCAP assessment revealed that the van lacked up-to-date crash avoidance technology while also posing a risk of injury to drivers and passengers. Below we dive into what ANCAPs safety assessments are, how the Mitsubishi Express scored zero stars and what happens now.

What are the ANCAP crash tests?

ANCAP was established in 1993 to create a star-rating safety guide to measure new vehicles entering the Australia automotive market. Since being founded, ANCAP has conducted thousands of tests and published safety data on over 700 vehicles.

The safety rating is based on a series of internationally recognised, independent crash test and safety assessments. These tests are updated every two years to encourage the incorporation of the newest safety features and technologies.

How do ANCAP calculate a safety rating?

The performance test of current active safety systems assesses the effectiveness of safety assist technologies. The tests include:

After conducting the ANCAP tests, the vehicles are given a rating out of five. A vehicle’s overall star rating is determined by its weakest score from the series of tests.

How did the Mitsubishi Express receive a zero-star rating?

The Mitsubishi Express was tested by ANCAP between October 2020 and January 2021. The report released by ANCAP provided that the Express recorded a 55% rating on adult occupant protection. For context, the current Toyota Hiace (tested in 2019) earned a 94% rating for this criteria. Under the protection of vulnerable road users (pedestrians and cyclists), the Express is ‘below-par,’ scoring 40%. The lowest scoring criteria was the modern safety systems; here, the Express scored 7% as many new features were absent from the model.

As the Mitsubishi Express scored a 7% in the safety features category, the vehicle could only receive a zero-star rating. ANCAP has said the poor rating will “send a clear signal to manufacturers and their global parent companies, that safety must be prioritised in all segments offered to the Australasian market.”

What will happen to Mitsubishi Express?

The ANCAP report does not prevent the vehicle from being driven on Australian roads; however, the decision will likely impact its sale in Australia. Often businesses will only purchase five-star rated vehicles for their workforce to limit the likelihood of a crash. Workers spend more time on the road than the average motorist, so vehicle safety is often a priority. As the Express is designed and marketed as a work van, a zero-star rating will likely negatively impact its sales.

Despite the poor safety rating, a representative from Mitsubishi has confirmed that they will continue to sell the van in Australia.

How safe is my car?

There are so many cars on the market, both new and secondhand, with a variety of safety features. If you want to learn more about the newest safety features available on the market or considering an upgrade, chat with the friendly team at Car Search Brokers.

We offer independent advice on which vehicles are best suited for your lifestyle and needs. Even without a specific car type, we advise you on which upgrades and additional features will offer the best value for your intended use.